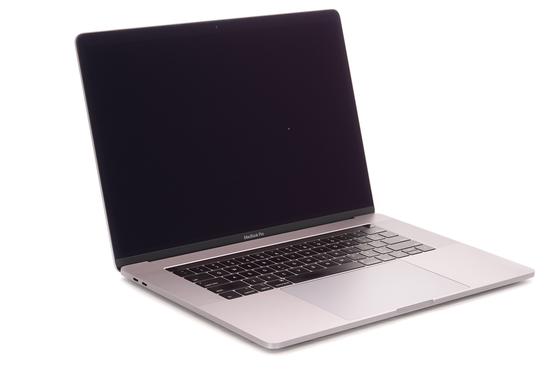 Images are for the actual product you will receive.

4 ⭐⭐⭐⭐ This Apple MacBook Pro 15" with Touch Bar has been fully tested and serviced by our team of tech experts and works like new. There are some signs of previous use, but what fun is a rental if you don’t use it? Any signs of previous use are minor and superficial and there are no notable marks or scratches. All the photos to the left are of the item you would receive so you can see for yourself (yes, we really have someone downstairs photographing every preloved product). Features: 15" Retina True Tone display, Touch Bar, 256GB SSD Flash Storage, 802.11ac WiFi, 16GB 2400Mhz DDR4 RAM, Intel UHD 630 + Radeon Pro 555X 4GB GPU, and 2.6 GHz Core i7 (I7-9750H) CPU. Includes: AC cable, USB cable and the original packaging.

Up to 32GB of memory for running multiple pro apps.

MacBook Pro elevates the notebook to a whole new level of performance and portability. Wherever your ideas take you, you’ll get there faster than ever with high‑performance processors and memory, advanced graphics, blazing‑fast storage and more.

Retouch, edit and work with high-resolution photos in Photoshop at lightning speed.

Build code, run multiple virtual machines and see your work take shape — faster than ever before.

Play a graphics-intensive game like Fortnite and enjoy responsive performance and vivid detail.

More power at its cores.

With the latest Intel Core processors, MacBook Pro reaches new heights in compute performance. The 15‑inch model is now available with an 8-core ninth-generation Intel Core i9 processor that reaches Turbo Boost speeds up to 5.0GHz. This gives 3D graphics apps like Autodesk Maya render speeds that are up to 40 per cent faster than the previous-generation 6‑core processor and up to twice as fast as a quad-core processor.2 And a new eighth-generation quad‑core processor on the 13‑inch MacBook Pro makes it ready to take on even the toughest tasks. So when you’re powering through pro‑level processing jobs like compiling code, rendering 3D models, adding special effects, layering multiple tracks or encoding video, you’ll get everything done. Faster.

For faster performance when working with large files, or running multiple pro apps or virtual machines, the 15‑inch MacBook Pro can be configured with up to 32GB of high‑performance 2400MHz DDR4 memory.

Desktop-class graphics without the desktop.

Blackmagic Design has created two external GPUs (eGPUs) ideal for MacBook Pro. So you can have desktop-class graphics performance without giving up the portability of a notebook. Housed in an all-in-one aluminium enclosure, Blackmagic eGPUs are powerful yet quiet, charge your Mac using Thunderbolt 3, and have built-in I/O connections to drive both a Thunderbolt 3 display and VR accessories simultaneously. Choose the Blackmagic eGPU to accelerate pro apps and enjoy remarkably smooth gaming, or the Blackmagic eGPU Pro for the ultimate workstation-class graphics performance for pro app workflows and VR content creation.

More ways to be productive. Always within reach.

Now on every MacBook Pro, the Touch Bar replaces the function keys that have long occupied the top of your keyboard with something much more versatile and capable. It changes automatically based on what you’re doing to show you relevant tools that are intuitive to use — system controls like volume and brightness, interactive ways to adjust or browse through content, and intelligent typing features like emoji and predictive text, just to name a few.

Familiar gestures make it easy to use the Touch Bar. Tap to expand the Control Strip, flick to adjust volume and brightness, or slide to rewind while watching a movie.

Tap to move between tabs in Safari.

Touch and hold to see original versions of your photos while editing.

Flick your finger to adjust brightness and volume.

Slide to choose a font colour in your Keynote slides.

Just what you need.
Right where you need it.

Many of the built-in apps on your MacBook Pro have Touch Bar controls that make common actions like sending an email or formatting a document even easier. The Touch Bar changes to match the app you’re using, bringing these shortcuts front and centre. And third-party apps can take advantage of the Touch Bar as well.

Customise what you use most.

You can create shortcuts in your Control Strip and in apps like Mail, Pages, Safari and Final Cut Pro X to help you work faster and be more productive.

Advanced security. At your fingertip.

With Touch ID, you can unlock your MacBook Pro in an instant. You can also use Apple Pay to make secure online purchases on participating websites, quickly access system settings and locked notes, and even switch between users — all with the touch of a finger.

Every MacBook Pro is equipped with the Apple T2 Security Chip — our second‑generation custom-engineered Mac silicon chip designed to make everything you do even more secure. It includes a Secure Enclave coprocessor that provides the foundation for secure boot and encrypted storage capabilities. It also consolidates many discrete controllers — including the system management controller, audio controller and SSD controller — into one. And the Apple T2 Security Chip brings a familiar voice to MacBook Pro — Hey Siri is always ready to open apps, find documents, play music or answer your questions.

Make quicker work of everything.

MacBook Pro includes a solid-state drive that’s blazing fast, with sequential read speeds up to 3.2GB/s. The 15‑inch model is available with up to a 4TB SSD, and the 13‑inch MacBook Pro is available with up to a 2TB SSD — enough space to take even your biggest files with you, like large photo libraries or video projects. So you can boot up, launch multiple apps or import huge files in a flash. And with the Apple T2 Security Chip, everything is automatically encrypted on the fly.

Thunderbolt 3 combines ultra‑high bandwidth with the remarkable versatility of the USB‑C industry standard to create one revved‑up universal port. It integrates data transfer, charging and video output in a single connector, delivering up to 40 Gbps of throughput for twice the bandwidth of Thunderbolt 2. Both sizes of MacBook Pro are available with up to four ports, so you can do all of that from either side. Existing devices are easily connected with a cable or adapter. And Thunderbolt 3 is reversible, so no matter how you plug in, it’s always the right way up.

Easy on the eyes.
Music to your ears.

The Retina display in MacBook Pro is the best ever in a Mac notebook. It features bright LED backlighting and a high contrast ratio, delivering deep blacks and bright whites. It supports P3 wide colour for even more vibrant greens and reds than with sRGB. And every MacBook Pro features True Tone technology. The white balance automatically adjusts to match the colour temperature of the light around you — for a more natural viewing experience. MacBook Pro has a dynamic sound stage that feels and sounds much wider than its physical dimensions imply. Movies are more immersive. Music more room-filling. And three built-in mics form directional beams that capture your voice more clearly for FaceTime calls and talking to Siri.

Your workspace just got quieter.

The MacBook Pro keyboard has a butterfly mechanism — providing four times more key stability than a traditional scissor mechanism, along with greater comfort. Every MacBook Pro now features a keyboard with a quieter typing experience. And the spacious Force Touch trackpad gives your fingers plenty of room to gesture and click.

Featuring all-new, dedicated apps for music, TV and podcasts, smart new features in the apps you use every day, and Sidecar, which lets you use iPad as a second Mac display.

15.4-inch (diagonal) LED-backlit display with IPS technology; 2880-by-1800 native resolution at 220 pixels per inch with support for millions of colours

Configurable to 32GB of memory

macOS is the operating system that powers every Mac. macOS Catalina gives you more of everything you love about Mac. So you can take everything you do above and beyond.