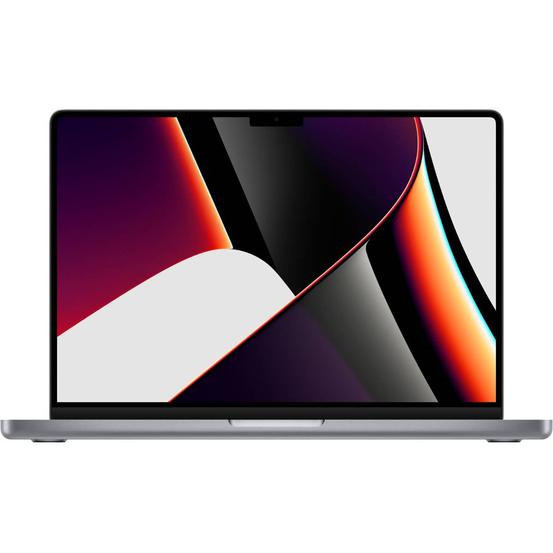 The most powerful MacBook Pro ever is here. The Apple MacBook Pro 14" M1 Pro Chip with 10Core CPU /16GB/1TB SSD Space Grey- MKGQ3X/A with the blazing-fast M1 Pro — the first Apple silicon designed for pros — you get groundbreaking performance and amazing battery life. Add to that a stunning Liquid Retina XDR display, the best camera and audio ever in a Mac notebook, and all the ports you need. The first notebook of its kind, this MacBook Pro is a beast.

Scaling up M1’s transformational architecture, M1 Pro offers amazing performance with industry-leading power efficiency. The CPU in M1 Pro delivers up to 70 per cent faster CPU performance than M1, so tasks like compiling projects in Xcode are faster than ever. The GPU in M1 Pro is up to 2x faster than M1, allowing pro users to fly through the most demanding graphics workflows.

M1 Pro introduces a system-on-a-chip (SoC) architecture to pro systems for the first time. The chip features fast unified memory, industry-leading performance per watt and incredible power efficiency, along with increased memory bandwidth and capacity. M1 Pro offers up to 1TB of memory bandwidth with support for up to 16GB of unified memory. Having this huge amount of memory enables graphics-intensive workflows previously unimaginable on a notebook.

The efficient architecture of M1 Pro means it deliver the same level of performance whether your MacBook Pro is plugged in or using the battery. M1 Pro also features an enhanced media engine with a dedicated ProRes accelerator specifically for pro video processing. M1 Pro is one of the most powerful chips Apple has ever built.

A new 10-core CPU, including eight high-performance cores and two high-efficiency cores, is up to 70 per cent faster than M1, resulting in unbelievable pro CPU performance. Compared with the latest 8-core PC laptop chip, M1 Pro delivers up to 1.7x more CPU performance at the same power level and achieves the PC chip’s peak performance using up to 70 per cent less power. Even the most demanding tasks, like high-resolution photo editing, are handled with ease by M1 Pro.

M1 Pro has an up to 16-core GPU that is up to 2x faster than M1 and up to 7x faster than the integrated graphics on the latest 8-core PC laptop chip. Compared to a powerful discrete GPU for PC notebooks, M1 Pro delivers more performance while using up to 70 per cent less power. And M1 Pro can be configured with up to 32GB of fast unified memory, with up to 200GB/s of memory bandwidth, enabling creatives like 3D artists and game developers to do more on the go than ever before.

M1 Pro is loaded with advanced custom technologies that help push pro workflows to the next level:

macOS and Apps Unleash the Capabilities of M1 Pro

By designing Monterey for Apple silicon, your Mac wakes instantly from sleep, and the entire system is fast and incredibly responsive.

Developer technologies like Metal let apps take full advantage of the new chips, and optimisations in Core ML utilise the powerful Neural Engine so machine learning models can run even faster. Pro app workload data is used to help optimise how macOS assigns multi-threaded tasks to the CPU cores for maximum performance, and advanced power management features intelligently allocate tasks between the performance and efficiency cores for both incredible speed and battery life.

The combination of macOS with M1, M1 Pro or M1 Max also delivers industry-leading security protections, including hardware-verified secure boot, runtime anti-exploitation technologies and fast, in-line encryption for files. All of Apple’s Mac apps are optimised for — and run natively on — Apple silicon, and there are over 10,000 Universal apps and plug-ins available. Existing Mac apps that have not yet been updated to Universal will run seamlessly with Apple’s Rosetta 2 technology, and users can also run iPhone and iPad apps directly on the Mac, opening a huge new universe of possibilities.

Feast your eyes on the best display ever in a notebook, featuring Extreme Dynamic Range and a 1,000,000:1 contrast ratio. HDR content comes to life in photos, video and games — with refined specular highlights, incredible detail in shadows, and vibrant, true-to-life colours. Each display is factory-calibrated and features pro reference modes for HDR colour grading, photography, design and print production.

ProMotion comes to Mac for the first time, making everything from scrolling through a web page to gaming incredibly fluid and responsive — while also reducing power consumption. With refresh rates of up to 120Hz, the adaptive technology automatically adjusts to match the movement of the content. ProMotion video editors can also choose a fixed refresh rate that precisely aligns with their footage.

Staying connected is more important than ever. That’s why the new MacBook Pro camera has double the resolution — 1080p — and uses a lens with a wider aperture that lets in more light. Together with a larger image sensor that has more efficient pixels, the camera delivers two times better low‑light performance.

Thanks to mics with an up to 60 per cent lower noise floor, MacBook Pro can capture even the subtlest sounds. And the three-mic array uses directional beamforming so your voice always comes through loud and clear.

Four force-cancelling woofers reveal notes up to a half-octave deeper and fill the room with up to 80 per cent more bass. And the high‑performance tweeters project clearer, fuller vocals.

Thanks to the room‑filling six‑speaker system and advanced algorithms, MacBook Pro supports spatial audio when playing music or video with Dolby Atmos, creating a sophisticated, three‑dimensional sound stage. Combine that with the Liquid Retina XDR display, and it’s like having a portable cinema.

More plugged in than ever

Transfer photos and videos with an SDXC card reader. Connect to TVs or displays with HDMI output. Listen using a 3.5-millimetre headphone jack that detects and automatically adjusts for high‑impedance headphones. Connect to high-speed peripherals or displays with three Thunderbolt 4 ports. And fast‑charge using the quick‑releasing MagSafe 3 port.

For the first time, Magic Keyboard brings a full‑height function key row to MacBook Pro — with the tactile feel of mechanical keys that pros love. It includes new keyboard shortcuts for Spotlight, Siri, Dictation and Do Not Disturb. And Touch ID has a new, tactile ring that guides your finger for a fast, easy, secure way to unlock your Mac.