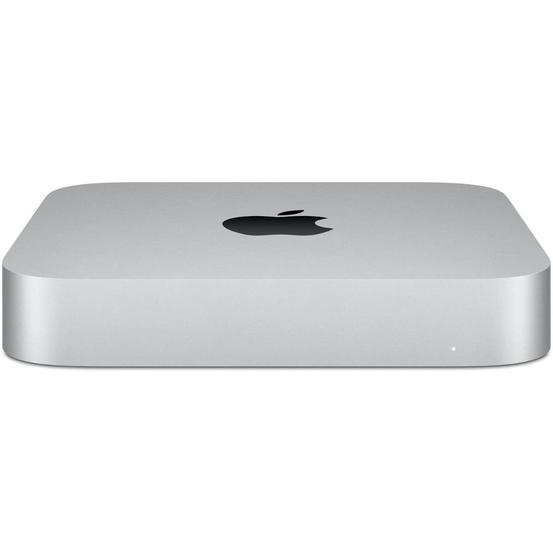 The Apple Mac mini with an M1 chip, 8-core CPU, 256GB SSD - Silver (2020) takes the Mac mini, the most versatile, do-it-all Mac desktop, to a whole new level of performance. With up to 3x faster CPU performance, up to 6x faster graphics, a powerful Neural Engine with up to 15x faster machine learning capabilities, and superfast unified memory — all in an incredibly compact design.

Apple M1 system on a chip (SoC) is the first chip designed specifically for Mac integrating the CPU, GPU, Neural Engine, I/O and so much more onto a single tiny chip. Packed with an astonishing 16 billion transistors, the Apple M1 offers incredible performance, thanks to custom-engineered technologies and industry-leading power efficiency.

Create, work, and play on Mac mini with speed and power beyond anything you ever imagine. The 8-core CPU delivers up to 3x faster processing performance than the previous generation and the 8-core GPU in the M1 chip is the most advanced graphics processor Apple has built to date - bringing extremely fast integrated graphics to Mac mini, with a gigantic 6x increase in graphics performance. That's an insane amount of power - all while keeping its iconic 19.7-centimeter design.

Until now, a Mac mini needed multiple chips to deliver all of its features — including the processor, I/O, security, and memory. With M1, these technologies are combined into a single system on a chip (SoC), delivering a new level of integration for more simplicity, more efficiency, and amazing performance. And with incredibly small transistors measured at an atomic scale, M1 is remarkably complex — packing the largest number of transistors Apple's ever put into a single chip.

Next-level Engineering
The Apple M1 system on a chip (SoC) integrates the CPU, GPU, Neural Engine, I/O, and so much more onto a single tiny chip. With incredible performance, custom technologies, and industry-leading power efficiency, M1 is not just a next step for Mac — it’s another level entirely.

As a result, all of the technologies in the SoC can access the same data without copying it between multiple pools of memory. This dramatically improves performance and power efficiency. Video apps are snappier. Games are richer and more detailed. Image processing is lightning-fast. And your entire system is more responsive.

8-core CPU | Massive performance at a fraction of the power

Apple's M1 chip makes the Mac mini outrageously fast and powerful. Its 8‑core CPU rips through complex workflows and heavy workloads, with up to 3x faster-processing performance than the previous generation — all with unbelievable energy efficiency.

Designed to speed through tasks using the least amount of power, M1 features two types of cores: high performance and high efficiency. So from editing family photos to exporting iMovie videos for the web to managing huge RAW libraries in Lightroom to checking your email, M1 tears through it all — without tearing through battery life.

The high-performance core is the world’s fastest CPU core when it comes to low-power silicon — and M1 has four of them combining their efforts for a massive boost in performance.

Four high-efficiency cores
Four efficiency cores deliver outstanding performance for everyday tasks using just a tenth of the power. These e‑cores are the most efficient place to run lightweight tasks, allowing the performance cores to tackle the most demanding workloads.

M1 is different. Its integrated graphics bring the best of both worlds compared to traditional discrete chips — a huge increase in graphics performance together with low power consumption.

With up to eight GPU cores, M1 is capable of executing nearly 25,000 threads at a time. From teraflops to texture bandwidth to fill rate to power efficiency, this GPU is in a class of its own — and brings the world’s fastest integrated graphics to a personal computer.

Instant Computing | Drastically reduced load times
The M1 chip and macOS Big Sur work together to make the entire system snappier. Everyday tasks like launching apps are nearly instantaneous. Scrolling in Safari is even smoother. System animations are snappier. And the sheer speed of M1, combined with macOS technologies like Metal, delivers a huge boost to even the most demanding apps — so you can do things like render 3D animations or edit RAW video footage with ease.

Advanced security
M1 and Big Sur offer the most advanced security of any personal computer. With hardware‑verified secure boot. Automatic high‑performance encryption for all your files. And new security protections built deep into the code execution architecture of M1.

Towering performance. Minus the tower.

The integration of technologies on the M1 chip allows Mac mini to blow away computers many times its size — taking on intensive tasks while consuming up to 60 percent less energy than the previous generation.

Mac mini comes with all-flash storage for all your photo and video libraries, files, and apps. And with speeds up to 3.4GB/s, apps, and files launch and load in an instant.

Compact & Versatile | Turn any display* into a powerful Mac

With its compact size, incredible performance, and a wide array of ports, the Mac mini is perfect for a surprising range of uses. And with the powerful M1 chip unleashed within its 19.7-centimeter-square frame, you never know where you’ll find a Mac mini hard at work.

With two screaming-fast Thunderbolt/USB 4 ports, two USB‑A ports, HDMI 2.0, Wi-Fi 6, and Gigabit Ethernet, the Mac mini is up for anything and everything.

Thunderbolt/USB 4
Transfer data at up to 40 Gbps. Charge and power external devices. Connect one external display up to 6K and a second with HDMI 2.0 up to 4K.

Wi-Fi 6
Another first for Mac mini, Wi-Fi 6 delivers better all-round performance and up to 1.2 Gbps of throughput — for lightning-fast file transfers or backing up to Time Machine.